Is There Anybody There? 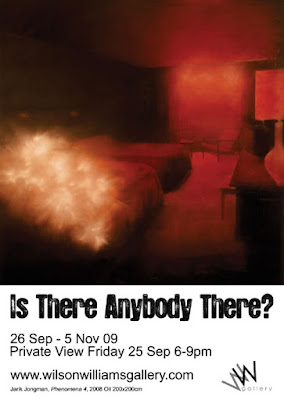 "The facade of this unassuming Victorian house hides a dark past. A former crack den turned art gallery, WW has a history of dilapidation, violence and paranormal activity. This once rat-infested East London squat was razed to the ground, not once, but twice, as if in an effort to purge itself. Despite being resurrected as a des res in 2003, the new owners were disturbed by strange goings-on and had it 'ghost-busted' before its reincarnation as WW Gallery.

Taking inspiration from this turbulent history, curators Debra Wilson and Chiara Williams present 'Is There Anybody There?'. A seasonal and atmospheric exhibition about the unexplained and 'things that go bump in the night', the show takes in Halloween, Bonfire Night and the gallery's first anniversary.

The directors have transformed the fortunes of 30 Queensdown Rd, situated between trendy Dalston and the infamous Murder Mile, into a positive, thriving and ambitious new project space, which participated in this year's 53rd Venice Biennale, the most important and glamorous event in the art calendar.